Lamont Smith discovered Ex Fabula through Terminal Milwaukee, the story telling series centered around WMSE’s Tom Crawford telling stories about Milwaukee neighborhoods. “It made a phenomenal first impression on me, in its sincerity.” Lamont made a phenomenal impression on everyone at the Terminal Milwaukee event held at Satin Wave barbershop, and he’ll be sharing that barbershop story with us at the Season 6 Kickoff. 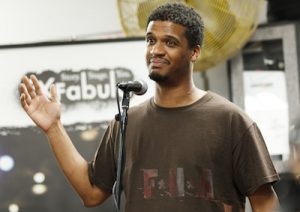 Lamont is passionate about anything that can serve as a vehicle for real butter. He loves the odors of Milwaukee (the valley, stale beer at Summerfest, malt from the old Ambrosia chocolate factory) but misses North Avenue of the mid 90’s, with the Chocolate Factory, Prospect Mall, and The Globe. Lamont writes Local Trolley, an e-zine for happenings of local culture in Milwaukee and elsewhere. 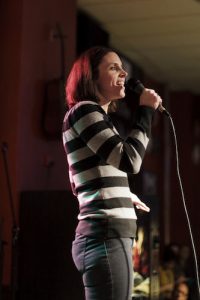 Tracy Lehrmann first came across a mention of Ex Fabula in the Shepherd Express.  “I’d always wanted to hear live storytelling,” she recalls, “and it was far cooler than I could have imagined.” Tracy told a story at the“Faking It” event in Season 3 that won her the Audience Favorite vote, and we’re thrilled to bring that story back to the stage. In fact, we won’t say anything more about her story. Spoilers!

Tracy is most proud of her husband. “Still don’t know how I scored him”, she jokes. And for those who haven’t yet graced the Ex Fabula stage, Tracy wants you to share your story, because Milwaukee wants to hear it. 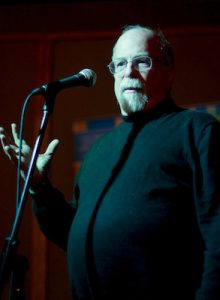 Jody Hirsh comes to Ex Fabula through founder Leah Delaney’s mom, Rose, who is his colleague at the Jewish Community Center. We owe Rose a big thank you, as Jody’s “It Gets Better” story really wowed the audience when he shared it back in Season 2.

Jody is proud of his career as a Jewish Educator; in fact, earlier this year, he received a Jewish Educational Leadership Award for his work. He’s also proud to be a “citizen of the world”. “I’ve lived in so many places worldwide, that I think the world is my home rather than any particular city or country.” He also really loves Milwaukee for its convenience as well as its great theater and arts scene. He’s still hoping that we get high speed rail. 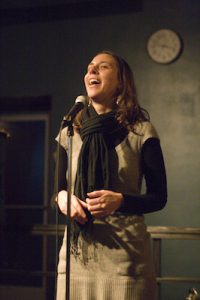 Leah Leone will share a story she told in Season 1, at Ex Fabula’s 2nd event ever; the place was Sugar Maple, the theme was “Second Thoughts”, and the story has been a founder favorite ever since. Unfortunately we hadn’t mastered the art of recording yet, so we’ve been waiting for years to hear this tale again. Leah has been a longtime Ex Fabula volunteer as well as a storyteller, and her favorite memory is volunteering at Club Garibaldi in March 2012 when the theme was “Green”. “It was so packed that everyone was sitting on the pool and ping-pong tables and you could hardly walk through the room. The stories were great, and the energy was so intense because of the densely packed audience.”

Leah’s favorite storytellers include her boyfriend Josh, his father Curt, and Mona Baker, a translation theorist who looks at the ways translators and interpreters frame their translations within culturally, politically and personally constructed narratives.

The Ex Fabula volunteers can’t wait to hear these stories, so we hope you’ll join us on Thursday September 18th, where we’ll enjoy appetizers and stories on the patio of the Hot Water Wherehouse.