December 14th–The first true breath of Wisconsin winter. The Wind Chill blew a bitter, bone-chilling cold, which seemed to only embolden the Ex Fabula audience to bundle up and face Old Man Winter for our December StorySlam (and the last of 2016), “Perfect Storm.”

As the crowd meandered into the Times Theater, there was an electricity in the air. While holiday tunes played overhead, strangers and friends chatted as audience members freed themselves from their protective layers and settled in for a night of love, laughter and loss. 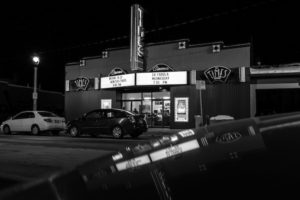 Our first story of the evening came from Magda Peck who pranced to the stage like a peacock very excited to be a “virgin” Storyteller. What happens when your 91-year-old mother, the fiercest, most independent woman you know has “the stroke” yet hangs on because she’s determined to die at home? If you’re Magda, you race against time, battling both your mother’s failing systems and the hospital’s endless red tape.

Our second story took us on the full circle of life (we had to). Peter Woods took us on his first adventure living independently from his folks. Starry-eyed, he wanted to live like Kerouac and found some “mad cats” that wanted the same. He found the Dean to his Sal and the madcap gang spent a lot of time together; until one fateful night and a treacherous drive in a winter storm heading west on I-94, when Peter suddenly found himself re-thinking his life’s direction.

Our third story of the evening came from Michael Bathke. Michael’s stepfather (Bumpa) loved to drive to Florida. He loved it so much he turned it into the annual family vacation. Long after the kids had grown and Michael’s mother had divorced him, Bumpa continued his trips to Florida. On one such trip, he returned with an exotic bird whose only call was that of a foghorn. Bumpa loved the bird. The bird hated everyone but Bumpa (and Michael). Two years after Bumpa’s death, Michael’s mornings begin with coffee and a foghorn. 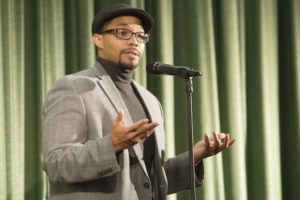 After the third storyteller, our Hostess with the Mostest, Megan McGee shared some interesting Perfect Storm UltraShorts before a five-minute break to freshen up, stretch their legs, and/or visit the concession bar.

Chad Johnson began, “2008, you either cringe or repress it. Due to the great recession.” He went on to explain that in 2008 he was on the fast track to a six-figure salary at Aurora Healthcare while others were drowning. However, as he looked around at all the “things” he had, he realized he was empty inside—he had lost faith. What do you do when you have everything but feel nothing for it? You quit and go back to the beginning and find where you lost your faith. We were all moved by Chad’s story of sacrifice and redemption.

As the stage lights cast shadows against the green theater curtains, our second Newbie Andy Parmann, took the stage. Andy books underground metal and punk bands–bands that aren’t usually big on rules or permits. Except this time, the festival Andy was planning was expecting 600-800 people and the venue’s max capacity was 500 and Andy did NOT have the correct permits. 48 hours before the event. What would you do?

Our last “Newbie” of the evening was Margaret Siebers who shared a lovely memory of her family on a cold December night in Lower Michigan. “It was a night much like this,” she began. While watching the sun begin to set from their cabin, Margaret and her sister trekked down to the lake bluff to build a fortress of a bonfire for the family to return when the sky grew dark. Bundled up and supplied with hot cider and snacks, the snow began to fall and eventually blow, yet the family huddled closer together. Etched in Margaret’s mind, it will forever be the “Perfect Storm.”

Our last group of Storytellers began with Sandy Brusin. A long time ago, in a world before everyone owned a cell phone, Sandy Brusin arrived at the airport on a beautiful Milwaukee afternoon. She was on her way to rendezvous with her husband who had been in New Jersey, waiting for her. When she landed in Chicago she was delayed, more than once. On the third delay she called her son, beyond panicked, “Okay Ma, here’s what you hafta do.” Sandy admits it was the first time she’s ever listened to her son! However, his advice got her off of the plane first as she ran into her husband’s waiting arms like a scene from a movie! 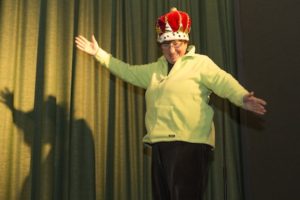 Next up was Liza Barry-Kessler. Like so many of us, Liza remembers exactly where she was on 9/11 and it wasn’t at home. She was across the country. After a week of grounded flights, grief and homesickness, Liza decided to keep her rental car and drive the 3,000+ miles from Anaheim, CA to Washington, DC. With an 8×10 laminated map of the United States, Liza embarked on her journey. Around mid-country, tired of solitude, she took a detour and picked up a semi-stranger in Colorado. This stranger introduced Liza to an entirely new adventure.

Last but not least, our final Storyteller of the evening was Deserae Constantineau. “It began with a bitter text from his ex-wife on the fourth Thanksgiving morning since he lost custody of his children.” The next week received a text of a photo of a suicide note written by her brother, a Veteran struggling with PTSD and sobriety. Deserae explained the tumult of emotions she felt as she drove to her brother, wondering what she would find. “When the storm comes,” she said, “it comes for all of us.”

After the votes were tallied and more UltraShorts were read, the Audience Favorite of the evening, and coming back for the Ex Fabula May All Stars, was Sandy Brusin!

Thanks to our wonderful event sponsor, Four Corners of the World, as well as all our season sponsors and members, whose support makes these events possible. Also, thank you volunteers, audience members and storytellers! We’ll see you in 2017.