Whether you’re a Democrat or a Republican, male or female, there’s no better phrase than “it’s complicated” to describe the mixed emotions Americans have felt over the last couple of weeks. And while many emotions come into play – surprise,  frustration, and more – November’s “It’s Complicated” StorySlam reminded us that complications are part of our lives, for better and for worse.

The slam took place at Hot Water Wherehouse on a balmy November evening and our first few tellers all seemed to echo a common theme: family can be complicated. 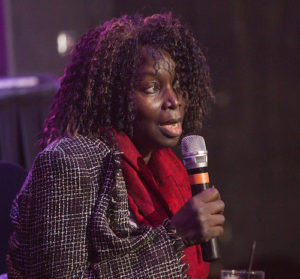 Being a father can be a challenge. Being a father when you have a child with special needs? Well, you guessed it: it’s complicated. Through Kevin McGee’s experiences raising a son with schizophrenia, the audience learned that sometimes all you can do is support one another even when you see trouble ahead. Tony Anderson’s story about his autistic son, Evan, demonstrated how resilient families can be in the face of complications. With the assistance of behavioral therapists and special education teachers, Evan’s world is still full of possibilities.

Communication can be complicated. Just like Kevin and Tony had to find ways to communicate differently with their sons, our next teller Rose Onama (like Obama) had to find a way to communicate with native English speakers after moving from Uganda to the United States with her sister. Her story about asking a classmate for a “rubber” had the audience laughing out loud at the generous heaping of comic relief.

After a quick break, the audience returned to their seats for stories from first-time tellers. Karen Seeliger recalled a memorable conversation with a black man at a party that forced her to confront her own naiveté and sheltered childhood. A Madison native, Karen admitted that identity can be complicated. 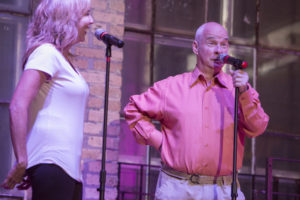 Next up was a special treat: a Terkel, which is a two person, interview-format story. Amie Losi interviewed her eccentric neighbor and dog-walking friend, Tom Wilke. The interview uncovered a complicated childhood involving three different foster families, an encounter with his birth mother as an adult, and the ultimate realization that Tom already had a family in his kids, his neighborhood, and in Amie, his caretaker.

The final first-time teller was UW-Milwaukee students Emily Kuester who shared a story of a fourth grade recess gone awry when she lost her shoe in a pile of snow and had to explain the missing item to her teacher and her mom. It just goes to show that complications aren’t age-specific! 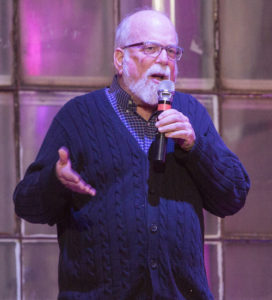 Lisa Williams dove right in with an honest declaration that speaks for itself: “I’m black, I’m a lesbian, I’m a woman, and I’m a Buddhist.” However, finding out who you are is a complicated journey and no one knows that better than Lisa, who took many wrong turns before being able to get on the stage and declare her love for women and acceptance of herself.

We couldn’t have an “It’s Complicated” slam without stories regarding matters of the heart, which is what we got to hear from our last two tellers. Laura Alsteen shared a story about a man who she cannot let go, even in spite of all the complications he brings. The heart wants what it wants and in this case, it wants true love (because love is always complicated, right?). 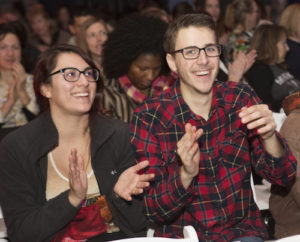 As if love isn’t complicated enough, try being a 60-something gay man whose American, straight, Orthodox Jew friends insisted on fixing him up with an Oscar-producing man who admitted to having illicit affairs with famous people. Complicated, right? Well, that’s what the final teller of the night, Jody Hirsh, had to share – and he then went on to be crowned as the night’s Audience Favorite.

Thanks to everyone who joined us and made this event so special – to our volunteers, members, sponsors, and Hot Water Wherehouse!