It was a perfect autumn evening with a warm breeze and a large harvest moon hanging low in the sky as fans and friends passed through the doors of the Milwaukee Public Museum. Audience members received the rare opportunity to explore the Museum after-hours, taking a stroll through The Streets of Old Milwaukee and other exhibits before settling in for a night of moving stories that made us laugh, cry and cheer.

First to take the stage was Bill Stevens with a tale about being a Dad trying to embarrass his college Freshman son with a hideous gopher sweatshirt, a Badger game-day prank, and squirrels that hiding in the dandiest of places. 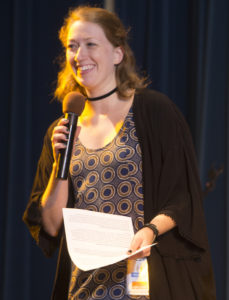 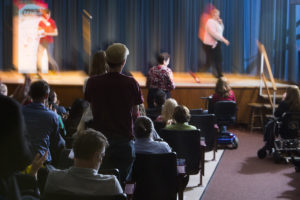 Attendees leap to their feet as Laurel leaves the stage. Photo by Art Montes

Since the second teller has memory loss due to a concussion, she opted to do a “Terkel” (an interview format story) with the assistance of Ex Fabula Executive Director Megan McGee. Laurel Blackstone‘s powerful story of an abusive marriage, trauma, and becoming a survivor was rewarded with a warm standing ovation from the audience.

Then next up was Lisa Williams who shared a story of hidden shame; shame of being too dark, too poor, too much of every stereotype that she has seen and heard growing up and how she has learned to release that shame and accept herself.

After a break, we heard three first timers. First was Sally Stanton, an anthropologist and curator for the Museum who talked about a different kind of hiding: things and people that are hidden in plain sight; with a few tricks of her own along the way. The momentum kept going with Tara Sisco who had made a deal with her best friend to take a dresser and armoire off of her friend’s hands… and got more than she bargained for, in the form of a pair of eyes staring back at her. Then came Barbara Leigh. As a girl, she had read every Nancy Drew mystery and had big plans to be a PI some day. When she grew up, she found herself studying theater in London. However, when Barbara found herself on the outside of a film institute with all of her belongings on the inside, her skills rivaled anything Nancy Drew and MacGyver could ever come up with.

What’s a “Hidden” StorySlam without a couple “family” stories? Liza Kessler realized early on that her family was different; her parents were one of the first Caucasian families to send their child on a bus to the newly desegregated Milwaukee Public Schools, and her mother worked at the White House quite often. While everyone else knew that her parents were prominent political figures, Liza wanted to be “like everyone else”, which hampered her ability to see how truly amazing and unique her family actually was.

Sue Blaustein also kept many things hidden, but instead of hiding who her family was like so many others coming of age in the late 60s, she had to hide who she was from her family. With an older sister gone off to college and parents who were the “original practioners of don’t ask don’t tell” Sue recalled the loneliness of having to hide emotions and experiences from the people closest to you.

Last but not least, Ryan Webster was doing anything but hiding when he walked into a Cambodian café and began practicing his language skills on two Cambodian waitresses. When the two women invited him for a night on the town, he wasn’t sure what the night would bring and never dreamed of what he’d find hidden in the Cambodian delicacy they offered him hours later.

As the audience submitted their ballots and the volunteers began the tally, we were treated to a story from the Milwaukee Public Museum’s Curator of Ancient History and Egyptologist Carter Lupton who amazed the audience with a discovery he and a colleague made using CAT scans, reuniting the mummies of an ancient father and son that had been hidden in plain sight for nearly 100 years. 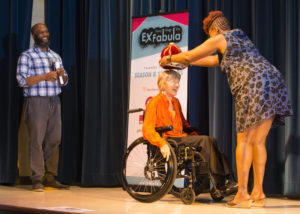 When the ballots were all counted the October Audience Favorite was, Ms. Nancy Drew herself, Barbara Leigh. Congratulations, Barbara!

Thanks to everyone who made this event possible – the storytellers, volunteers, members, supporters, attendees, and of course our new venue and event partner the Milwaukee Public Museum. Want to see more? Check out the photos from Art Montes which we’ve posted here.

Be sure to check out the program that inspired this evening’s theme:  Hidden Wisconsin: Unseen. Unknown. Uncovered. It closes January 8, 2017 so don’t delay! You can even share your story in the #MyHiddenWI photo campaign.