“Louder than a Bomb” at the Milwaukee Film Festival

“Louder than a Bomb” at the Milwaukee Film Festival

Ex Fabula is thrilled to sponsor the film Louder than a Bomb, and we hope you’ll join us at the Milwaukee Film Festival in the interim before our fall season begins. 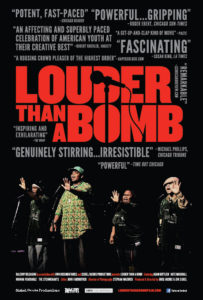 Louder than a Bomb follows a group of teens who tell their stories poetry slam style as they prepare for the world’s largest youth poetry slam – Chicago’s Louder than a Bomb fest. Spotlighting teams of prep-school prodigies and urgan troubadours, the event bridges cultural rifts and tempers the trials of adolescence through the performance, critique and revision of hundreds of original pieces. This film won audience awards at six major festivals and is sure to be a hit in Milwaukee as well, so we hope you’ll join us for this inspirational film.

Tickets are on sale now on the Milwaukee Film website for the following screenings:

Visit Ex Fabula’s Facebook page on Tuesday and Wednesday for chances to win a pair of tickets to the screenings. We’ll ask you to post your UltraShort story related to film or movies and then randomly select a winner from the responses.
See you at the Festival!